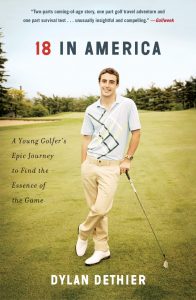 18 in America, Dylan Dethier’s first book, was published in 2013 by Scribner.

From an independent bookstore           via indiebound.org

Praise for 18 in America:

An enterprising and inspirational golf journey unlike any other.
-Jim Nantz, CBS Sports

I loved 18 in America and the connection I share with Dylan Dethier to both the game of golf and our country. Anybody who has swung a golf club can tell you that its more than a game — it becomes a personal challenge that helps you discover yourself. Dylan writes about his adventures with wisdom beyond his years.
–Jason Dufner, two-time PGA Tour winner


Dylan Dethier sets out to tee it up in each of the lower 48 states in this winning memoir, which transcends golf’s elitist image, exposing the generous, diverse, and contradictory soul of the game—and of America itself.

“This is a superb book about golf — but it’s also a superb book about growing up, fitting in, friendship, food and the great American road. I barely know a birdie from a bogie, but it didn’t matter: I still devoured Dylan Dethier’s memorable tale of innocence lost and wisdom won.”
–A.J. Jacobs, New York Times-bestselling author of The Know-it-All and Drop Dead Healthy

“It is not every year that a well-conceived golf book is written by a recent high school graduate… Sleeping in his car, showering at truck stops and raiding free motel breakfast buffets, Dethier played wherever the road took him, with golf as a vehicle for understanding America. He played with autoworkers and livestock auctioneers, and his 32,000-mile trek became a tale about everything you can learn about your country 18 holes at a time. It was a journey that was much more than a golf trip.”
-Bill Pennington, The New York Times

18in America is a golf adventure that will appeal to anyone who has ever played the great game.At its heart, though, it is the story of a young man growing into adulthood, taking chances, making mistakes, finding out what feels right and what feels wrong. I salute Dylan Dethier for stepping off the good school-good college-good job treadmill and taking a year to find out who he really is, for writing about his amazing trip with such honesty and insight, and for being willing to reveal his flaws as openly as he revels in his triumphs. It is rare to find a bookespecially a golf book, especially a debut written by someone so youngthat smoothly blends pure fun and astute life lessons.18 in America will inspire golfers and adventurers both young and old.I enjoyed every page.
-Roland Merullo, author of Golfing with God and regular contributor to Golf World magazine

Whether showering in truck stops, meeting Phil Mickelson and Michael Jordan, or playing at Sawgrass and Pebble Beach, the simple story of 18 in America is filled with youthful enthusiasm, honest and sincere. It’s a lovely road story well told. Discover a young golf Kerouac on the road, teeing off all across America and loving it.”
–Tom Lavoie, Shelf Awareness

His trip was not just about par, birdies and bogeys. Dethier is not from the country club world of golf.
–Bob Minzesheimer, USA Today

Much more of a coming-of-age experience In addition to opening up a Berkshires boy to a bigger world, teaching him how to cope with new and sometimes difficult situations and giving him perspective on golfs place in American life, the 35,000-mile journey in his dusty Subaru definitely helped Dethier grow up fast this guy can really write.
–The Berkshire Eagle

Two parts coming-of-age story, one part golf travel adventure and one part survival test. The result, 18 in America, is the work of a young man who not only is unusually insightful and self-aware, but has the writerly gifts and clear voice to tell his story. In a year that is shaping up to be an unusually good one for golf literature, its unlikely that the genre is going to produce anything as compelling as Dethiers tale.
–Martin Kaufmann, Golfweek

“A great coming of age tale based around the most epic of golf trips. A quick and easy read that does not disappoint.”
–The Itinerant Golfer

I couldn’t put it down. The writing is vivid. You can see the people, imagine the places and understand a young man’s moments of loneliness and fear then on the next page laugh at his sense of humor. You’d think this was his 20th book, not his initial effort. I seldom read a book in two days, but I devoured Dethier’s superb 256-page effort.
–Richard Lord, Berkshire Eagle

“Intriguing… more than his share of unpredictable episodes that make for good reading.”
–Salt Lake Tribune

“This would be considered fine work by any writer, let alone one so young.”
The Maine Edge

“Like Jack Kerouac and Ken Kesey and a host of others before him, Dethier packed his used car and his meager life savings, and set off to see and write about America…. Encounters with hustlers and thieves aside, what resonates in 18 in America is Dethier’s optimism, and his talent for perceiving and telling of the good in things, be they golf or people.”
–ABC News

About the Book
At seventeen, Dylan couldn’t help but think he’d never really done anything with his life. So two months before his freshman year was set to begin, he deferred college for a year to boldly go where few (if any) golfers have gone before—to drive solo across the country and play a round of golf in all 48 contiguous states. In 18 in America: A Young Golfer’s Epic Journey to Find the Essence of the Game (Scribner, $25.00/hardcover; on-sale: May 21, 2013), Dylan Dethier, now a 21-year-old junior at Williams College, tells a remarkable and absorbingly written account of the courses he played, people he met, and the lessons about America and himself that he learned along the way.

On September 1, 2009, with $4,720 to his name, a few changes of clothes, his golf bag, and a two-man tent, Dethier (pronounced “de-CHAIR”), hopped into his trusty Subaru “Subie” and departed his hometown of Williamstown, Massachusetts to begin what would become a 35,000 mile trip. With the foolhardy pluck of youth, the then 17-year-old would talk his way into free rounds on some of America’s most celebrated courses—Pebble Beach, Bandon Dunes, Merion, and TPC Sawgrass. But he sought out sub-par (so to speak) rounds of golf, too, playing $10 municipal courses in places like Flint, Michigan, and Truth or Consequences, New Mexico.  He would caddie in a pro-am tournament with the likes of Phil Mickelson, Michael Jordan, Fred Couples, and Jimmie Johnson and he would play rounds with everyday Americans, from out-of-work auto workers, to CEOs, to regular weekend warriors. He would scare away a late night intruder with an axe, lose his virginity to a waitress, and narrowly escape losing a high-stakes round to a conniving golf shark in Las Vegas. In 18 in America, Dylan Dethier leaves Williamstown a boy and returns a man.

More than a travelogue, 18 in America is an impressively written exploration of the meaning of golf in America—how the sport uniquely brings together players from varying degrees of wealth, race, and age; how it can be both a meditative and yet a social experience; and how everyone who plays it is in search of transcendence of some kind by the time they putt out on 18. As Dethier writes: “Golf is a game built on possibility. Everything is going to get better the next shot, the next hole, the next round. Golf just keeps people coming back and it’s not because they’re sure to do better—but shoot, they might.”
Dethier’s eighteenth year was one of many firsts—venturing into the world alone, exploring life’s “Big Questions,” and fulfilling an ambitious quest. With captivating prose and a wry, engaging voice, this precocious writer weaves an unforgettable portrait of America’s fairways and those who wander them.